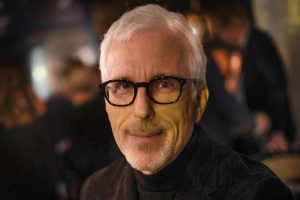 Since 2003, The Torgny Segerstedt Foundation has supported visiting professors in the Memory of Torgny Segerstedt. The holders are appointed by the University of Gothenburg for periods of one year and must represent subject fields with a connection to democracy, freedom of expression, human rights or religion. The professorship is not linked to any particular faculty.

For the year 2019-20, David Schneiderman is visiting professor in the Memory of Torgny Segerstedt, based at the Department of Law, School of Business, Economics and Law at the University of Gothenburg. He is Professor of Law and Political Science at the University of Toronto and a leading expert in constitutional law, freedom of expression and international law.

“It was an unexpected honour to take up a chair in Torgny Segerstedt’s name. As the child of survivors of the European Holocaust, I am proud to be appointed to the chair that carries his name,” Professor Schneiderman says.

Professor Schneiderman’s expertise lies in the areas of comparative constitutional law and international investment law. In his constitutional law work, he has been preoccupied with, among other things, freedom of expression and how media represent constitutional rights. Much of his research centres on the role of citizens in foreign policy and international agreements, where he feels that many issues related to social justice, climate change and peace are constrained by trade agreements that citizens cannot influence.

At this turbulent time in history, David Schneiderman is concerned about the decline in the rule of law and freedom of speech in many parts of the world. He emphasizes that a thriving democracy not only needs legal constraints and judicial review but also active citizens.

“I am a big believer in public participation, education, and publicity – this is why a robust freedom of expression plays a critical role in democratic societies. With freedom of speech we can speak out about how we are being governed and learn how others are being treated or mistreated,” he says.

In this respect, Torgny Segerstedt, can serve as an important role model, according to David Schneiderman. Admitting that he had not heard of Segerstedt before being offered a professorship in his name, he now describes the publisher as “an inspiring figure”.

“Torgny Segerstedt exhibited the characteristics of citizenship necessary for successful democratic societies. For example, he had courage – a key virtue in any democracy that is experiencing stress. He believed in publicity – the circulation ideas – critical to the spreading of knowledge and understanding. He had concern for the ‘other’ – about how fellow citizens and non-citizens are under stress. As a fierce and independent newspaper editor, Segerstedt, in my view, serves as a model of citizenship in a pluralist democracy,” Professor Schneiderman says.

Read an interview with the 2016-17 Professor Sami Adwan.