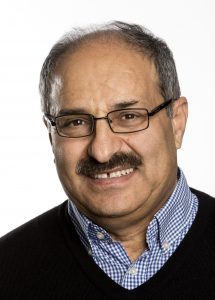 Sami Adwan is visiting professor to the Memory of Torgny Segerstedt 2016-17. As a founder of PRIME, the Peace Research Institute in the Middle East, Professor Adwan has pioneered new ways to use education in peace building.

Why have you dedicated your life to education and conflict resolution?

“I am a Palestinian from a village close to Hebron and I grew up learning that all my suffering came from the Israeli occupation. We lost our childhood and experienced all sorts of harassments, especially after the war in 1967. I felt all Jews were responsible. A few years later, around the age of 25, I got a chance to study in California where I made sure there were no Jewish or Israeli students in my class.

“My attitude started to change in the early 1990’s. By that time I had returned to Palestine with my degree and joined the first intifada and the Fatah movement which was outlawed according to Israeli laws. For this I was jailed, in administrative detentions, without any charges. But in jail I began to feel that in a way we were all prisoners – the guards were young Israeli soldiers who often looked very lonely, they didn’t really seem to be more free than we were. The real turning-point came one day when a prison guard tried to make me sign a paper written in Hebrew. Unable to read Hebrew I refused, and to my surprise another Israeli guard intervened on my behalf. I slowly began to realize that not all Israelis were the same.

“After that I started to think about how education can help us see and understand each other.”

Your method of using historical narratives to improve understanding has been widely acclaimed, could you please describe it?

“Around the time of the Oslo accords of 1993, Palestinians and Israelis began to meet in a programme called People to People and I got to know the Israeli social psychologist Dan Bar-On (1938-2008). In 1998 we started PRIME together. At that time we were quite optimistic– we believed, and still believe, in a two-state solution, and that education could help people live together in peace.

“We studied the school curriculums to see what students learn about the other and their traumatic historical experiences and realized that was very little. Palestinian children didn’t study the Holocaust. Israeli children do not learn about the Palestinian Catastrophe and school books don’t mention how Palestinians were driven from their land when Israel was founded. To Israelis, this is the War of Independence; Palestinians refer to it as Nakba, the Catastrophe. Another aspect that is never mentioned is the long history of peaceful co-existence between Jews and Arabs in the Middle East.

“PRIME therefore produced three booklets to be used in both Palestinian and Israeli high schools. The idea is to confront the students with the history of the others. Each booklet presents the Palestinian and the Israeli versions of events, side by side, with an empty space for the students to add their own reflections.”

Can this method be applied also in other conflict situations?

“Yes, actually I think that is true in any society. It is important to understand how others view their past, so that we can understand each other today. History really is not about the past, it’s about the lives we live now and in the future.

“The method has been studied by for example UNESCO, to see how it can be used in other conflict-ridden societies and has been tested as a model in Macedonia. It has also met quite some interest in Spain, Italy, France, Germany and the USA, and now also from Swedish schools. The booklets have been translated into several other languages, including Swedish.

“Actually it has been easier to spread this way of working internationally than in Israel and Palestine, where the situation in many ways has deteriorated.”

What does your professorship at Gothenburg University mean?

“I am so grateful for the opportunity to be here; the Department of Education, Communication and Learning is a very helpful and inspiring place to be. During this year I have been involved in several projects. Among other things I have interviewed 50 young Palestinians here for a book project, which I hope can also result in some kind of meeting or seminar.

“I also work with two local schools here in Gothenburg, Sjumilaskolan and Bergsjöskolan, holding workshops where students use writing as a means to empower them to learn more about themselves and others. They write based on five topics, starting with Who am I? Hopefully, this can become a permanent activity. Sweden has severe problems with segregation that need to be addressed.

“I also cooperate with teachers from Lerum and from the Ingrid Segerstedt Gymnasium in Gothenburg on introducing Palestinian and Israeli historical narratives to their students. In addition, I look into how Swedish textbooks at high-school level present the Middle East conflicts.”

Had you heard of Torgny Segerstedt before arriving here?

“I had heard the name, but it was after I was contacted about maybe coming here that I started reading up on him. Torgny Segerstedt really is so inspiring! We would need more people like him today, to counteract the increasing xenophobia, islamophobia and stereotyping. Torgny Segerstedt’s approach was so humanistic, he didn’t make a difference between people based on religion or skin pigment. His thoughts speak to us today and guide us on how to handle our current situation.”